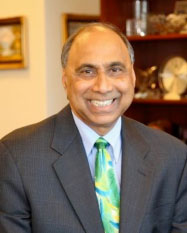 Frank F. Islam, man now living the American dream, is striving to help others follow suit. University of Colorado alumnus Frank F. Islam has endowed two scholarships for CU mathematics students. Born in India, Islam immigrated to the United States at 15. He earned bachelor’s and master’s degrees in computer science from the University of Colorado.  After working extensively in the federal government, he founded QSS group, an information-technology company, one of his many successful ventures.  “I am proud to be an alumnus of this university,” Islam told an audience during this year’s CU Conference on World Affairs. “This university is a true treasure. I admire the splendid beauty of this university. I care deeply and love this institution. My days at the University of Colorado were the best part of my life. This university gave me strength and courage and has taught me the dignity of hard work.”

Though he has lived the American dream, Islam believes that dream is in peril. He and co-authors George Muoz and Ed Crego make that case—and offer suggestions on how to reverse the trend—in a recently published book called “Renewing the American Dream.”  Islam now serves as CEO of FI Investment Group LLC, which focuses on providing growth capital to emerging companies and manages specialized and branded funds.  Islam and his co-authors define the American dream as the opportunity of citizens to realize their potential and to succeed, which includes “getting educated and working hard in order to have a good job that pays decent wages, provides adequate benefits, puts food on the table and a roof over one’s head, and allows for retirement with dignity.”

Islam is supporting the critical realm of education with both words and action. He recently endowed two scholarships—the Frank F. Islam Mathematics Scholarship Endowment Fund in Honor of William B. Jones and the Frank F. Islam Mathematics Scholarship Fund in Memory of Wolfgang J. Thron.  Jones is a professor emeritus of mathematics at CU, and he made a particular impression on Islam as a student. Jones now lives in Boulder with his wife, Martha. He remains active in the mathematics department, writing, editing and printing its newsletter. Jones is also described as a “passionate fund-raiser” for the department.  Thron was a CU professor of mathematics who passed away in 2001. He was a member of the Religious Society of Friends and the American Mathematical Society. Professor Thron earned a professional award from the Royal Norwegian Society of Science and Letters and also won the University Medal from the CU Board of Regents in 1985.

During the Conference on World Affairs, Islam paused to recognize Thron: “I admired him and respected him. He was kind, generous, and gracious. He helped me by providing me an opportunity to come to America. The spirit of this extraordinary man deeply touched me.

These two individuals were the instrument of my successful life journey and the core belief that we must continue the giving in any way we can,” Islam said recently. “I know they will be very happy to see the impact these scholarships will have on the lives of students. I hope these scholarships will allow students in the Mathematics Department to pursue their dreams, choose a career and make their marks on the world.”  As Islam emphasized, “When I give money for a scholarship program, I strongly believe I am investing in the future.  I had a great experience at CU, and I hope these scholarships will help the next generations of students to have the same great experience,” he said, adding, “I want to inspire others to have passion for philanthropy.”  To learn more about “Renewing the American Dream,” see www.renewingtheamericandream.net. Frank Islam’s site is www.ffislam.com.

This entry was posted in News. Bookmark the permalink.